Jadwiga and her background:

Jadwiga was the first female monarch of the Kingdom of Poland. The daughter of Louis I of Hungary and Elizabeth of Bosnia, she was crowned at just 10 years old on 16th October 1384. It is fair to say that internal family drama is what led to her taking the crown, as her older sister made the decision to take the Hungarian crown upon the death of their father thereby losing her the support of the lords of Lesser Poland. Therefore, they turned their support to the younger sister, Jadwiga (Or Hedwig in English). She ruled for just 15 years from 1384-1399. As in Poland the nobility were free to elect their own monarch, and thus they chose to elect Jadwiga (though the nobility of Greater Poland favoured another candidate). The reason for her title of King is purely technical: Polish law had no provision for queens and no rule against female kings, it also signified that she was ruler in her own right which is obviously important when it comes to the politics of marriage for a ruler.

At 12 years old she was married to the Pagan Grand Duke Jogaila of Lithuania on the agreement that her converts himself and his people to Roman Catholicism (His was the last Pagan state in Europe at the time). Their marriage created a personal union between Poland, Lithuania and Ruthenia which became essential in the following century in defending from German and Russian aggression. Thus began the Jagiellonian dynasty which lasted well into the late 16th century and is often regarded as a period of maximum political power, great prosperity, and in its later stage, the Golden Age of Polish culture.

Not many records survive which may illuminate Jadwiga’s role in the politics of the country, if anything this side of rule seems to have been largely handled by her husband. However, she is known to have led two successful military expeditions to reclaim Ruthenia from Hungary and to have also actively engaged and participated in diplomatic talks with the Teutonic Knights as well as mediating in her husbands talks with Lithuanian Princes.

What she is best known for however, was her contributions to Polish culture through her various charitable donations. She sponsored many artists and writers as well as founding hospitals. A great advocate of education, she paid for 20 Lithuanians to study at Prague and also funded the restoration of the Krakow academy, which was renamed to the Jagiellonian University in 1817 in honour of her and her husband.

King Jadwiga passed away from birthing complications in 1399, her daughter was unfortunately delivered around a month premature and both mother and daughter died a month later. She is buried at Wawel Cathedral along with her daughter and was made a saint of the Roman Catholic faith in 1997 by Pope John Paul II.

Portrayal Within the Game:

Jadwiga’s in-game aesthetic seems to be based on a particular portrait, I am currently trying to find more details about the portrait itself, but initial research indicated that it was actually painted a couple centuries after her death. Therefore, we cannot ascertain how accurate the portrait may be in terms of the quite note-worthy clothes (which are seemingly emphasising the personal union between Poland and Lithuania) though her face does bear at least somewhat of a resemblance to other, more contemporary portraits. Below is the portrait on which her in-game model is based as well as how she actually looks within the game:

The information about her contained within the in-game ‘Civlopedia’ is quite detailed and can be found here: http://civilization.wikia.com/wiki/Jadwiga_(Civ6)

Within Civ VI, all leaders have a ‘leader agenda’, which influences who they are likely to get along with and who they are not. The developers usually base this agenda around the design goals of the civilisation is question. For Jadwiga, her leader agenda is ‘Saint’, which makes her prefer pious civilisations who focus on their religion and building up in-game ‘faith’ points and strongly dislike those who neglect religion within the game. This is not a surprise for Jadwiga given what we know of her staunch religious convictions and therefore the game at least is portraying her ‘agenda’ in a reasonable and expected way. She is a religious/militaristic leader who tries to conquer those around them with military might before converting them to the Polish religion which is obviously Roman Catholic by default.

So far so good right? Now let’s get on to the traits of the Polish civilisation in general within the game.

As you can probably already guess from Jadwiga’s portrayal and agenda, the Polish are geared towards primarily military and religion victory types. The civilisations unique ability is ‘Golden Liberty’ which allows you to claim ownership of the land around an encampment when build (An encampment is a district you can build to train military units from as well as providing improved defence for your territory) as well as replacing a military policy slot with a wildcard policy slot. A military policy allows you to employ a powerful military bonus for your civilisation, such as reduced cost of maintaining your armies, while a wildcard policy slot can be filled by any bonus including military, economic and diplomatic bonuses. Making the Polish much more versatile in their selected bonuses compared to other civilisations within the game. The ability to claim lands (even lands owned already by another player), also known as a ‘culture bomb’, encourages aggressive military expansion and strategic placement of your encampment (you are limited to one encampment per city). The extremely important note about the ‘culture bomb’ is that land claimed in this way is automatically converted to your religion, allowing you to both steal up valuable land and convert your heathen neighbour in one swift stroke!

The name, ‘Golden Liberty’, is a reference to the political system of Poland (and later of Lithuania too under the Polish-Lithuanian commonwealth after the Union of Lublin in 1569) which gave all nobles, regardless of wealth and status, were all entitled to equal legal status, rights and privileges. This included the nobility’s control of legislature and the ability to elect their own king. Therefore, it is a very prominent and important component of Polish cultural history and identity.

The Polish unique building is the Sukiennice, which replaces the market and provides benefits to the city in which it is build including gold income and increased trading capacity. The Sukiennice was a real life trading hub in Krakow, a kind of cloth hall used to export textiles and import other various trade goods. The Sukiennice’s in-game model depicts the Krakow Cloth Hall, which contains the Sukiennice Museum. The ‘Civilopedia’ entry for the Sukiennice can be found here: http://civilization.wikia.com/wiki/Sukiennice_(Civ6)

Lastly is the Polish unique unit, the Winged Hussar! You couldn’t possibly create a Polish civilisation without getting these guys in there somewhere. They are displayed in game with their famous winged armour riding horses and armed with lances. In reality, the winged hussars came from military reforms in Poland in the 1570’s which led to the development and training of hussars into an elite cavalry branch of the military, with the forces raised from the nobility. Following these reforms, the hussars became more of a heavy cavalry unit rather than the light cavalry they were originally devised to be. The Winged Hussars proved to be an extremely efficient and decisive military force, often being the deciding factor within the battle, with one notable example being in The Battle of Kluszyn (1610) during the Polish-Muscovite war during which the Polish managed to defeat the Russian forces despite being outnumbered roughly 5-1 thanks to the deployment of the Hussars. Within the game, the Winged Hussars enjoy a higher combat strength than all other in-game contemporary units as well as having the unique bonus of driving enemy units back when they attack, therefore highlighting the heavy cavalry’s terrifying the line breaking charges (if the enemy unit cannot physically be pushed back due to geography, they instead suffer heavy additional damage). Additionally, they also ignore enemy zone of control, which means they can move around enemy troops without suffering detrimental effects to their movement.

Here is a comparison of an contemporary painting of a Winged Hussar compared to the in-game portrayal: 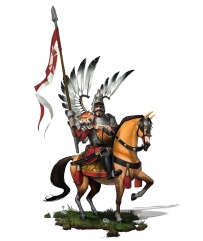 The unit is so powerful they allow military dominance of Poland in the period at which they become available The Civilopedia entry for the Winged Hussar can be found here: http://civilization.wikia.com/wiki/Winged_Hussar_(Civ6)

Now then, onto the last item on the agenda for discussion:

The announcement of Jadwiga as the leader of the official Polish civilisation was met with a fairly muted response among the primary discussion boards such as the civ forums and reddit. People claiming to be Polish themselves were generally fairly negative of the choice, suggesting that there are much more prominent male leaders who would have been a better fit for the civilisation. In the previous iteration of the Polish in Civilisation V, the Civ was led by the much more widely known Casimir III and many felt as though the replacement of Casimir III by Jadwiga was part of a more widespread issue of gender-pandering on the part of the developers. Though, while these comments and thoughts did exist it is important to note that this was a small minority and posts of this nature did not gain much traction often having more people who disagree with this view point rather than those who agree.

Gender-pandering is a criticism which comes up with almost every female leader (Except for Egypt and England apparently) announced within the game but fortunately is often overwhelmed by the more reasonable and logical arguments as to why that leader was chosen over male counterparts. In this case, the design decision to have Poland fill the role of a militaristic, religion-driven civilisation led to Jadwiga being one of the few candidates to fit that role while still maintaining some sense of consistency amongst the Civs design. Many people seem to not realise that often the mechanics and the historicism come hand in hand and the intended mechanical vision for the civilisation is often something the developers already have in mind. Therefore, Jadwiga was most likely chosen due to the gameplay vision of the developers rather than the historical vision of those in charge of that element of the game.

There has been no historical outcry over the unique units, buildings or abilities of the Polish and therefore it is safe to assume that in terms of the ‘feel’ of the Polish civilisation the developers have gotten it pretty close to how players expect the Polish to ‘feel’ as a playable civ.

What is more telling perhaps, than forums, is an examination of the modding community. As any person who seriously plays the Civilisation series can tell you, the modding community for this game is huge (A mod is a fan-made addition to the game which often add new components such as leaders and civilisations as well as changing the way the gameplay mechanics work). There is currently only one Polish civlisation mod, which is not popular at all and contains even more criticism within its comments than Jadwiga’s Polish did in the first place. Compared to other civilisations who host many popular leader mods as people are not content with the chosen leader. This clearly shows that there is not too much outrage at the decision to put Jadwiga as the Polish leader and that on the whole players are content. Though obviously mods can be created and evolve over time so we will have to see how the situation develops.

So this hopefully covers the Polish civilisation led by King Jadwiga in Civilisation VI.

Just a University of Winchester Post-Grad student looking to make his way in the big wide world of academia and research. View all posts by hopley35